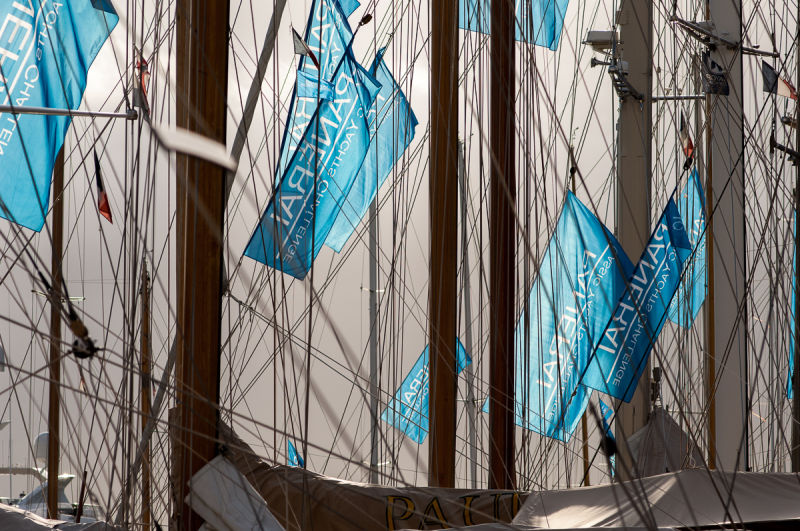 The coastal resort of Cannes on the Cote d’Azur, France is synonymous with chic, glitz, actors and actresses parading on the beach during the annual film festival. However, along the coast a few hundred metres is the old port, which started out as a small fishing harbour and this is the setting today for the Panerai Regates Royales, an annual classic boat regatta which is held during September. Shrouded by the church topped hill overlooking the quay, beautiful classic boats from those designers who penned such wonderful lines all those years ago, plus newly built boats crafted from drawings in the spirit of those old masters.

I have covered this event a couple of times before and such is its draw with me that I am back again. The event, part of the Panerai Classic series, draws large entries and this year it is no exception with over 90 entries plus the Dragon class which boost numbers even further.

At dusk, the moored yachts set against the backdrop of the floodlit church, provide a perfect setting for the race tactics to be discussed by the crews. If you haven’t been to such an event before, and you marvel at the craftsmanship employed on such craft, then I urge you to do so.

Photographically, on shore, there is plenty to photograph – the people, the scene, the yachts, they all demand attention from the lens. The still air of the early morning contrasts with the bustle as the yachts return from racing during the afternoon with the crews celebrating or commiserating in the bar as the case may be. I’ve already mentioned the dusk scenes, and these provide perfect camera fodder, as does the glitz and bright lights further along into the town promenade with its changing floor lights in garish colours such as lurid pink or cobalt blue!

On the water the competition, despite the age of the yachts, is fierce. Certain distances are kept, especially when rounding the marks, but 30+ metre yachts do need a lot of room to turn. On board these yachts classified as ‘Big Boats’, the effort needed to change course is immense.

Last year I was lucky enough to photograph aboard the Fife designed Moonbeam IV, skippered by Mikael Creac’h. This boat, needed six burly crew just to control the mast while tacking, taking the strain of the stresses as the pressures transfer from one tack to the other. Bites of rope are hauled in unison and they did a good job, bringing the yacht home to win the Big Boat class.

Currently I’m sat at the airport waiting my flight and then the transfer from Nice to Cannes. Later this afternoon I will start shooting, trying to capture the essence of the place; the atmosphere that surrounds these beautiful yachts, before the racing starts tomorrow. I can’t wait.