Crews are the topic in Cannes 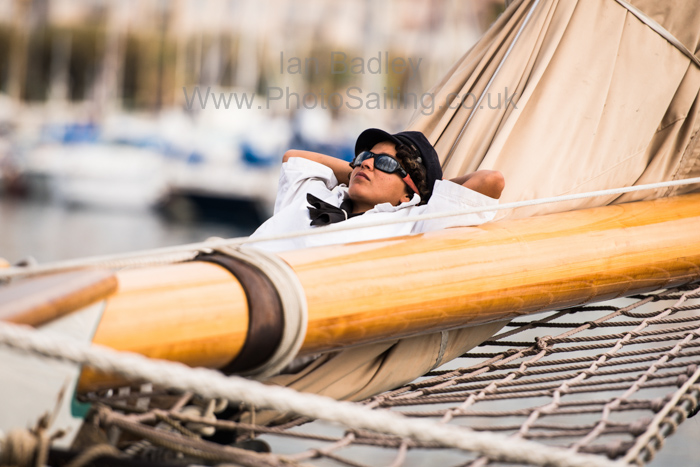 A quieter day on the water in Cannes for the Panerai Regates Royales, a round of the Panerai Classic Yacht Challenge. Winds were lighter than the 20 knot winds experienced yesterday. On shore, before the start, delayed waiting for the sea breeze to build, the atmosphere felt more relaxed than usual. Perhaps there were a few hangovers from the revelling over the Americas Cup last night. Certainly in the Irish bar I frequented to watch that epic final, there was no holding back on the black stuff that’s for sure.


Anyway, I digress. The skill of the skippers, managing not only these expensive classic yachts, many with a provenance that would please many a yacht broker - such as being the yacht Prince Rainier once owned and spent his honeymoon on with Grace Kelly – but also the crew numbering over 30 on the bigger yachts, starts on the dock.

With very tall masts adjacent to each other leaving the stern-to berthing is a trial in itself. At stages up the mast are spreaders. These eponymously spread the load of the stays, which are the wires that hold the mast vertical. However, as the yachts move they roll and there is a great chance of these spreaders getting tangled with those of the adjacent yacht with catastrophic consequences. Luckily this didn’t happen today, but they are so so close.


Given the quieter day, looking round the crews I look for unusual aspects to photograph. Laying in the foresail of one of the yachts, one of the crew was catching some shut eye before the action started. This gave me the topic of the day, the crew.

Thus when the racing did start, I concentrated on taking photographs of the crews working aboard. Whether it was the helmsman, bowman directing the position at the start, or the teams hauling the huge sails across whilst tacking or gybing, that was my emphasis for the day, the crew working as a team was my photographic theme.

Photographically, this is often a good method to work, giving yourself an objective to complete or a theme to work for. It concentrates the mind and makes you work harder to achieve the goal.

I’ve uploaded the images here, Panerai Regates Royales Images plus some new action images for your perusal. These are not all the images taken, just a selection.

Tomorrow is my last day here. I wonder what the weather will provide for us? We’ll see soon enough.