On a Terrace eating oysters 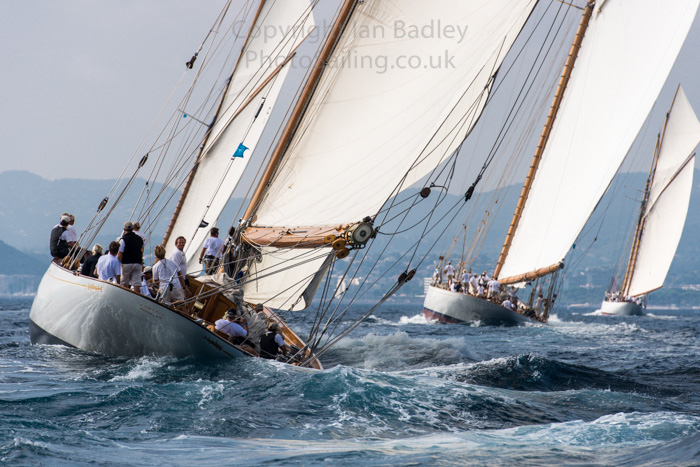 On a Terrace eating oysters

I now know a whole lot more about oysters than I did yesterday. The Cannes Yacht Club, organisers of the Panerai Regates Royales, had laid on an oyster bar yesterday evening as a thank you to the reporters and photographers covering the event, which included me.

For instant, when you open an oyster, you should discard the initial juice in the shell as this is too salty. Leave the opened oyster on ice for a short while and more juice emerges from the oyster and the oyster flesh starts to turn white, then is the time to eat the plump oyster and slurp the ozone fresh juice, either naturally or squeezed with a touch of lemon juice or maybe Tabasco. They were without doubt, the best oysters I had ever tasted. Perhaps, this was because they had been treated correctly so that they were in prime, sweet, condition. To accompany these, a clean and not too dry Cotes du Gascoigne, married perfectly.

The venue was set on a ‘terrace’ overlooking the multi million pound classic yachts moored on the old port at Cannes. To top it, the high clouds turned that beautiful pink hue that landscape photographers yearn to capture, set against a darkening blue sky just after sunset.

Before you think this a travel programme, the terrace was the Portacabin aka the regatta office set on top of the Media room, also another Portacabin. But hey ho, the oysters and wine were most welcome, as was the fact that the organisers had taken the trouble to put on the event for us. So well done to the Cannes Yacht Club.

This morning the clouds were set high above, the basin was still, the red and white AP (postponement) flags were flying – or in fact, not flying but lying flaccidly on their flag pole. Boats usually start to leave port to the start area for the racing around 10.30am. The time marched on with crews catching up on some sleep, which seems to be a regular occurrence round here. In particular, the crew of Kelpie, a beautiful Alfred Mylne designed yacht dating back to 1902, sported a foredeck covered in sprawling crew laid out. But they were not alone!

At least the postponement gave me a chance to catch up with a few crew and skippers, sharing a joke or comment about the previous dates racing; why they won; or why the winds weren’t quite right for their particular design of yacht.

In such situations what I also do is try and pick out the detail of the yachts. For instant, many of the yachts have a cap on the end of the wooden boom – the horizontal pole on a yacht at the bottom of the sail. This is to minimise water ingress into the end grain of the wood. Many of these caps are ornate designs, usually depicting the boat name. In addition other boat builders either stamp the boat name onto winches or, as is the case for Fife built yacht Eva, small brass plaques fitted in many different positions on boom, deck and mast. Looking for these idiosyncrasies is interesting and provides interesting detail for photographers and publishers alike.

Finally, just before 2:00 pm we departed the dock out to a zephyr wind at the start line. Further delay caused me some angst, as I had to catch the bus back to Nice at 5:30pm for my flight home. With the agreement of the press boat skipper, we waited on the water. After a while, on the horizon we could see some yachts hard on the wind, canted over on a heel indicating that the sea breeze had started. This also shifted some of the cloud to let the sun through. The sea started to chop and the racing was on.

Photographically, three or four days on the water covering an event, you must work harder to try for different shots as you’ve been photographing the same yachts each day. As I mentioned in yesterday’s blog, that day I focussed on the crew on the yachts. Sometimes different opportunities present themselves due to the conditions or the order of a race start. If for example a faster boat makes a mistake at the start, it causes bunching further into the race. This can be used to photographic advantage. You still have to be on the ball however, checking camera settings, aperture, histogram and focus. It’s all too easy to think you have a winner of a shot only to find there is too much camera movement creating an unsharp image. (As an aside, the one button press of my Nikon D800e is a godsend here. One press and you are zoomed in on the monitor. This saves so much time out on the water.)

If things do go awry, there may be, but not always, time to have another crack at it. Sometimes however, the moment is lost forever. Adjusting ones settings is a constant process according to the light, position, wave state, speed of the boats, angle of the boats and depth of field required to name just a few things. Add in factors like today when you are following up wind, the yachts are healing over and crashing into the waves as is the boat I was taking pictures on. Trying to time a shot as the yacht crashes though a wave whilst avoiding a wave crashing over the boat I was riding in. This is a reoccurring problem for yacht photographers, having to incessantly check the lens isn’t covered with spray. Sometimes you don’t have to check. That’s when you know it is! Today, it seemed that every time I lifted up the camera – and I was using three today – another bucket of azur blue salty water was dumped unceremoniously over me and the cameras. The chamois and numerous dry cloths were kept in full employment that’s for sure. A good wash down later will be a necessity as it always is from a day on the water and a trip to Nikon for an end of season service as well.

After nearly three hours on the water and a fast ride back from the turning mark back to the port, I had a short time to make my transport connections. A quick visit to the press officers Suisaig and Carla, to thank them for their assistance during the week, then a rush back to the lodgings to change out of the wet clothes, then to catch the bus.

Waiting at the airport I had time to check through the images from today. Having deleted the duff photos including a number bizarrely of the inside of my camera bag, I have to say that I was pleased with a quite a few from today. Importantly they were different shots. The same boats, but taken in different ways, positions or company, to add to the portfolio of work.

Another good regatta. All I’ve got to do now is make sure the editors like the shots.

Keep practicing
I am


Even Spiderman was out there!