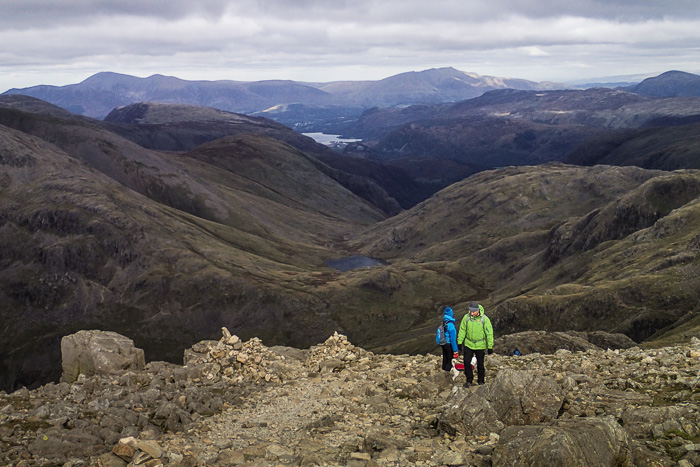 Respite! - with videos at the end of the article

After the crew had departed from the Lake District Workshop, (see previous Blog entry), my wife Julia joined me prior to us heading further north to scout new areas of photographic interest.

I expect most people would think that running workshops are easy. No doubt for some they are but for me, I find them very draining. Being on your metal constantly; endeavouring to ensure that everyone’s expectations are met; ensuring that everyone receives the tuition they require in equal quantity; thinking on your feet when the plan has to change for whatever reason – usually the weather; and this, the culmination of after days, sometimes weeks of planning means I am knackered when they finish.

So I find that some respite is needed. I started with an 8 miler around the eastern hills of Ullswater. Heavy showers, windy with some beautiful light at times started the process. This had been a day when I had planned to climb Scafell, but the forecast was not good. The winds were seriously strong above 500mtrs and with cloud cover at this height also, prudence took over.

Julia and my plans to climb Scafell have been thwarted a number of attempts in the past, the most recent being in April, when snow and ice were the problem. The following day, the winds were still forecast at gale force with gusts of 50 – 60 mph on the peak, with a chill factor down to -13°C, but the visibility – a great aspect to consider for safety – was unusually good with very clear skies for the day. We therefore went for it, leaving Seathwaite farm at 9:15am.

The first part of the climb up to Sty Head is steep at first then quite gentle as you clamber over boulders along the Gill, I think the weather had put many people off the climb. The last time I was up here, the procession of climbers was incessant. Today, we were few and far between. 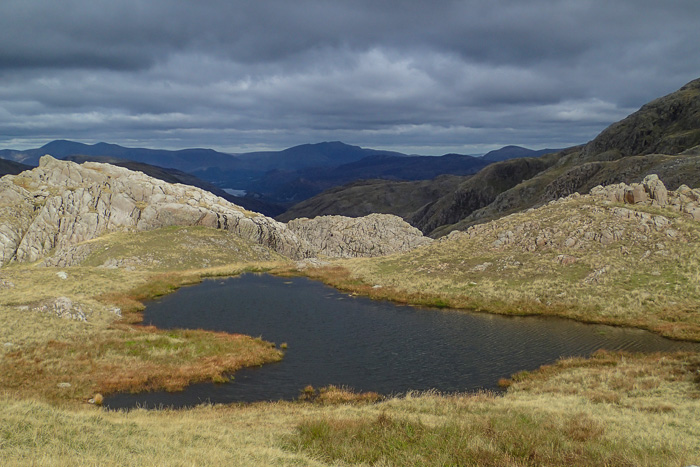 Sty Head itself is around halfway up at just 480mtrs and the chill factor had started to kick in so a quick fuel stop and drink was consumed before starting along the Corridor route to the top. Sty Head is very pretty as also is Sprinkling Tarn a short distance away. The light was skudding around giving some drama so a few snaps were taken as we hiked.

Along the Corridor Route there are a couple of scrambles. These are hands and knees scrambles over usually bare rock and equally usually with a drop or two off the side, any opportunity of a semblance of path being totally out of the question due to natural geological aspects. If you have read my Newsletters and previous Blogs, particularly regarding the Isle of Skye Cuillin Hills, you will know that Julia does not like heights. Well, not so much heights as drops, so I knew I would have to guide her over these parts but to be fair, she coped pretty well and didn’t yelp too much for a change.

Exiting the Corridor Route by Lingmell Coll above Wasdale Head you look up to the great wall of rock that is Scafell Pike some 200 or so metres above but only about half a tortuous mile away with no obvious route up. Spaced out cairns make the course over the boulders and scree and the wind is incredibly strong on this day. Now, I am not of tender frame, but the strength of the wind knocked me off balance and the final few hundred metres to the summit was really tough and unsettling due to the wind strength. The unstable footing combined with the constant buffeting causing me to be blown over at one point!

Reaching the summit it was, as expected, bitterly bitingly cold. Huddled behind the large cairn we snaffled down a sandwich and glugged some hot coffee. I did shoot a short video. It’s not pretty, but it will give you a flavour of what it was like at the highest point of England, some 978 craggy, boulder ridden metres, (3208 feet in old money), high in the Cumbrian mountains


The views were incredibly clear but it was not sensible to linger up there too long before descending, which, like ascent was hazardous for the first half a mile or so from the summit.
On the right there is an image looking back down from the rock strewn path about 400 mtres from the summit with Sty Head Tarn being the smaller water in with Derwent Water in the far distance. 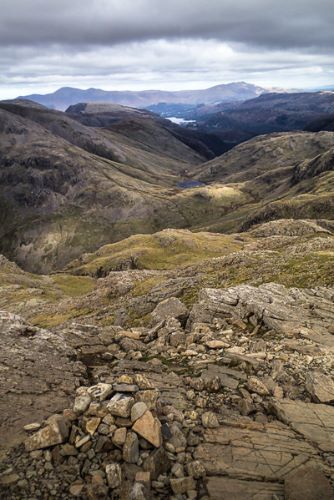 Looking back on the descent really gives a feeling of how high you have climbed with the clear views of the day reinforcing this.
Out of the wind, here is another short video shot whilst waiting for Julia.


I arrived back at Seathwaite Farm at 4:18pm, some 7 hours and near 10 miles after leaving. Julia arrived about 15 minutes later, but that’s quite normal. A couple of pints of Jennings set the refuel in process and my respite was over. Onward and upward they say, tomorrow it’s Scotland.