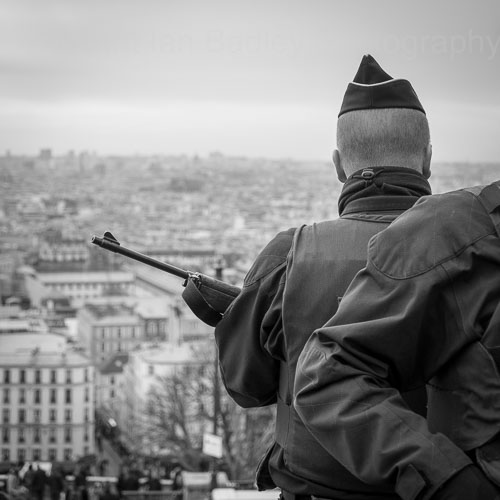 It had been a good day. Locations for a forthcoming workshop in Paris had been checked; some approved, others discounted. Over an early evening drink in a bar just south of the 10th district we debated whether to go north to a recommended restaurant for dinner, or south into the Latin Quarter. We chose south as we were staying in hotel opposite Notre Dame.

The restaurant was good - a typical Parisian brasserie. It had been a long day tramping the streets, alleyways and boulevards of Paris in our quest to create a workshop itinerary that would provide interest and images for clients. Our legs were tired on our walk back to the hotel over the cobbled walkways. Passing the bustling bars and terraces around 9:30pm on the still warm for November evening there was convivial banter persisting between Jim Pascoe and me as usual.

Paris is different to other cities in that there are no skyscrapers evident in the city centre. Instead, majestic government buildings, architecturally beautiful, line the River Seine. On the island that divides the river, stands the stunning historic Notre Dame cathedral. My bedroom overlooked this iconic view, illuminated at this time against the dark sky.

Like other major cities, blue lights and sirens frequently bounced off the adjacent buildings and tonight was no different – or so we thought. Until, that is, I received a text from my daughter asking if we were alright. Turning on the television brought home the awful truth. Watching as the news unfolded, the ever increasing police and security forces rushed passed our hotel in an unending stream. A cavalcade of police outriders and large black limousines drove along the Quai towards the Ministry of Interior’s building westward of us. The local bars, restaurants and streets emptied of people as news disbursed. The atrocities created anxiety. In the early hours with the news that the Bataclan concert hall had been stormed by security services, some of the developments stalled. A fitful sleep ensued.

Early in the morning, empty streets and an eerie feel was evident. The oriental tourists, lead by a flag waving guide, were still photographing Notre Dame, albeit from afar, and slowly the roads started to fill.
Some of the Metro lines were closed but most were open. Having discussed the situation amongst us, we decided to stick to our plan and headed to Montmartre. Outside the Sacre Coeur the presence of armed police was not unusual. Their armoury and state of high alert, stood back to back for protection was different. Interestingly, a question from a pretty woman drew their joint attention though, before sense prevailed and their back to back position resumed!

The busy local shopping areas around looked like business as usual. However the attention of the patrons taking coffee was being captivated by the horrendous pictures and reports in the newspapers they held in their hands.
During that evening, trucks filled with armed soldiers patrolled the streets. Police cars – two officers in the front and one in the back armed with a rifle - toured the cobbles. Roads were cordoned; buildings were protected. Sirens continued throughout the night as you would expect but city life continued as best it could.

The trip back on Eurostar brought discussions we didn’t expect to have.

The atrocities of that Friday 13th November 2015 will never be forgotten.