Gairloch and Skye - Part I 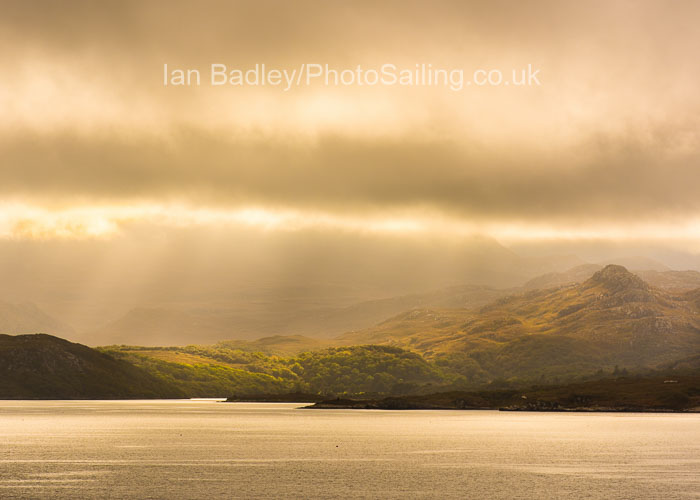 Overlooking Sheildaig
Gairloch, Loch Maree and Redpoint hadn't been visited by me for nearly ten years. Driving past Liathach and Beinn Eighe brought back fond memories of capturing a passing storm with cascading streams of light striking the mountains from black leaden skies.

So far, the weather has been ever changing in a pleasant way – I’ve been in shorts most of the time and it’s nearly October! On the north side of Loch Gairloch, photographing the sun rays striking the almost ubiquitous named village of Sheildaig, large pods of dolphin could be seen charging around the flat seas.

The land locked Loch Maree guarded by the prominent mountain of Slioch, looked as beautiful as ever. I always try and determine the finished format of the shot before I capture it in camera. I find it helps me to determine the composition visually from the outset. I actually don’t much care for the usual camera format of 3:2, preferring 7:5, 5:4, 2:1, 3:1 or square. Personally I find them more ‘arty’, but each to their own.

With the flat seas merging with visually with the sky on the horizon, the light variable tones of blue together with the tidal patterns on the water make for an almost surreal watercolour to my eye and attractive as a square crop.

Having hiked out to (apparently) the Queen’s favourite beach at the mouth of Loch Torridon, ( the one facing south not the more popular beach facing west), we were blessed with a stunning highly speckled sea with the Cuillins and Isles of Raasay and Rona on the horizon. A bank of fluffy clouds broke up the blue sky pictorially and for me, a 3:1 panoramic crop kept the image clean.

Processing the images involved the usual dodge and burn of the tones to lift the image into a picture. The initial edit and process has been pleasing, but may need some fine tuning later.

Further updates from the trip to come.
Keep practising.
I am
Ian